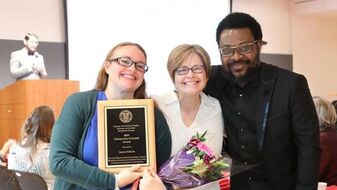 Jayme Kilburn is the Founding Artistic Director of the Strand Theater Company in Baltimore City and was named Artistic Director of Black Hills Community Theatre in Rapid City in 2021. She is a graduate of the University of California Santa Barbara with a degree in Dramatic Art and Psychology. In 2014, Jayme completed an interdisciplinary master's degree in Humanities and Social Thought at NYU and is currently a Ph.D. Candidate in Theatre Arts at Cornell University.

Jayme is an associate member of the Stage Directors and Choreographers Union. For her directing work, Jayme has won two Best Production Awards for directing projects in the Baltimore Playwright's Festival. She was named one of Broadwayworld.com's 2006 Up and Comers, Broadwayworld.com's 2007 Best of Baltimore Community Theater for Best Direction, and received recognition for the Strand as one of the "top five theaters in Baltimore 2011" from Baltimore Magazine under her leadership. Her artistic work has received grant funding from the Cornell Council of the Arts (CCA), Baltimore Office of Promotions and the Arts, Maryland State Arts Council, and Artscape. Jayme has directed over thirty plays including Mr. Burns, a post-electric play by Anne Washburn, Real Women Have Curves by Josefina Lopez, In The Blood by Suzan Lori-Parks, [sic] by Melissa James Gibson, The Mai by Marina Carr, The Glory of Living by Rebecca Gilman, One Flea Spare by Naomi Wallace, Anna Bella Eema by Lisa D'Amour and That Pretty Pretty; or, the Rape Play by Sheila Callaghan. Jayme's full-length plays Ding! Or Bye Bye Dad and Garbage Kids received their world premiere productions at Venus Theatre in 2014 and 2016. Jayme works with the Phoenix Players Theatre Group (founded by incarcerated men) and previously served on the board of Civic Ensemble, a community-based theater in Ithaca, NY.

Jayme has won three first-year writing seminar awards for her work as an instructor at Cornell University and was part of Cornell's NextGen Professors inaugural cohort. In 2018, Jayme received a $15,000 grant from Engaged Cornell to establish her Women's Performance Workshop as a permanent program in Baltimore City. In 2018, Jayme was a finalist in the Woodrow Wilson Dissertation Fellowship in Women's Studies. Jayme was recently awarded the 2019 Office of Inclusion and Student Engagement (OISE) Community Outreach Award, Cornell University's Provost Diversity Fellowship, and a Feminist, Gender, and Sexuality Studies Teaching Assistant Award for the 2019-2020 school year. In March 2019, Jayme organized a campus-wide community symposium entitled "Feminist Directions: Performance, Power, and Leadership" which brought together dozens of international, national, and locally-based artists and activists to engage in conversations surrounding artistic practice and power. In October 2020, Jayme, in collaboration with a group of Cornell graduates and undergraduates, produced Virtual Vibrance: Making, Shaking, Breaking Performance. Virtual Vibrance was an experimental project in form and function that celebrated black women artists. Jayme's research focuses on feminist performance, specifically as it pertains to women directors.
Powered by