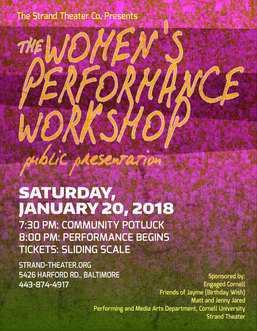 Women of diverse backgrounds are providing different models of directing that urge us to define and reevaluate how we teach and circulate knowledge about the discipline. In America, we are in a historical moment where women refuse to be silenced. Social media has fostered movements like the #metoo campaign and Time’s Up, sparking important discussions about sexual assault and inequity in the workplace. Right now, women’s visibility and silence-breaking are shifting systemic cultural biases and giving other women permission to tell their stories. While theater can be a powerful tool in giving a public voice to the disenfranchised, much of the theatrical process takes place in private spaces with little pedagogical evaluation. Directors, especially, exist in their own orbit and often craft their directing style through experience or outmoded texts that encourage authoritarianism. My project incorporates techniques employed by community-engaged theaters such as Roadside Theater (story-circles, personal narratives) and feminist performance collectives such as Split Britches and Spiderwoman Theatre (devised playmaking, collaborative staging) in an effort to radically alter how theater artists apply and define directing. By using participant-based directing applications, the Women’s Performance Workshop both embraces and dismantles hierarchical directing structures.

The WPW explores directing on multiple levels. First, it positions the trained director as the project’s facilitator; guiding the process but refraining from directing in a traditional capacity. Secondly, participant’s stage their own personal narratives; asked to lead the group through their position as director. As practice-based research, the WPW asks important questions about the director’s role in community-based theater. How can this traditionally hierarchal discipline be mobilized to complement rather than hinder community-based work and empower participants in the process?

The Women’s Performance Workshop has been in development since September 2015 when I facilitated the first group of Cornell undergraduate and graduate women in the spring ’16 AGIT Lab (Association of Graduates in Theater). This first iteration was an experiment in recreating second-wave feminist models of theater-making. In order to increase the project’s reach to the Ithaca community, I partnered with Civic Ensemble for the second iteration that took place over the 2016-2017 school year. In January 2018, I offered a two-day version of the workshop at the Strand Theater in Baltimore City. Since the first offering at the Strand Theater, I have returned several times to Baltimore offering multiple advanced and introductory workshops as well as facilitation workshops. Adhering to a community-engaged framework, which serves to decrease barriers to participation, the workshop offers participants child-care, transportation, refreshments, and the option of flexible attendance.

During the first portion of the workshop, the emphasis is on creating a discourse among participants. I lead participants in different forms of theater exercises and embodied pedagogy including dramaturgy, acting, improvisation, and story-circles. During the second half of the workshop participants write personal narratives that they will share with the group, eliciting feedback through Liz Lerman’s critical response model. These stories are then formed into collaborative performances with each member serving as the director of their own piece. The WPW provides a flexible structure and sufficient support so that working women, mothers, students, and economically disadvantaged individuals are able to participate.

Thanks in part to a grant from Engaged Cornell and the Baltimore Office of Promotions and the Arts, I have developed a handbook for the workshop and established the WPW as a permanent program at the Strand Theater.

"​Healing is a process. Having the outlet to share my stories made me feel light and to hear others' stories humbled me. After the event, I became vulnerable and honest with my feelings and I began setting boundaries that I never had the guts to do. I felt safe and connected to every persons who shared their stories that weekend. I am still healing...We are all healing. Jayme was excellent."

"​I gained power over a story/situation that previously held power over me. I did not expect to have such an empowering, therapeutic experience, but the supportive community Jayme created allowed me to process some of my trauma in a healthy, positive way. I could not be more grateful. I also learned so much from the experiences of the other women in the workshop. Something from each of the stories sticks with me and I find myself thinking of them often. "

The Revolution Will Not Be Televised | Strand Theater, Winter 2019

Speaking Out of Turn | Cornell University, Spring 2016
Powered by